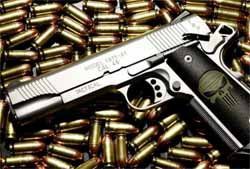 Reports that the state of Connecticut is preparing to send out letters to gun owners with unregistered firearms has caused some to speculate the state may be preparing to engage in house to house gun confiscation.

The Capitalism Institute claims to have a copy of a letter officials in Connecticut are preparing to send out to residents in the state who have not yet registered their firearms with the state.

In the wake of the Sandy Hook Elementary shooting, the state passed a draconian gun control law which required all owners of what it deems “assault weapons” to register them with the state by Jan. 3 of this year. As part of the law, Connecticut broadened the term to include more than 100 different types of semi-automatic weapons. The law prohibits the sale of any new weapons that meet the definition, but the law contains a grandfather clause providing individuals submit personal information to a state registry.

However, to date, an estimated 100,000 owners with 350,000 weapons have yet to come forward, which has caused concern among state officials over the civil disobedience. The law also prohibits the purchase of magazines containing more than ten rounds; however the lack of serial numbers makes it impossible for officials to determine how many residents have them unless they register them. To date, slightly over 36,000 magazines have been registered out of an estimated 2 million.

With the deadline now passed, officials are pondering their next step.

The letter by the Capitalism Institute was supposedly sent to those who registered their guns after the Jan. 3 deadline. It says, “We are returning your application for assault weapon certificate and /or large capacity magazine declaration because it was not received or postmarked prior to January 1, 2014.”

The letter goes on say with their registration request denied the gun owner has several options including voluntarily turning over the weapon or magazine to law enforcement, removing it from the state, sell it to a licensed gun dealer or make it inoperable.

The Blaze reported that a spokesperson with the Special Licensing and Firearms Unit of the Connecticut Department of Emergency Services and Public Protection told them that although a letter has been drafted to send to gun owners found to be in possession of unregistered semi-automatic rifles deemed illegal by the state’s new gun control law, not a single one has been mailed out yet.

The spokesperson, who did not want to identify herself, refused to comment on the draft letter’s contents. When asked what other type of action the state plans to take, she referred the Blaze to the governor’s office.

If the letter turns out to be accurate, it would mean those who had their applications rejected are undoubtedly now in some type of government database with the information they submitted. This has caused some to express concern the government could go house to house and confiscate weapons. In New York, following the state’s new gun control laws that were also passed after Sandy Hook, police were able to target gun owners who possessed weapons that were previously registered in the state and legal, but were now considered illegal.