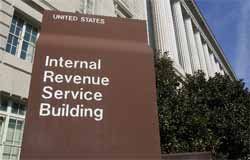 Conservative groups who have faced invasive questions from the IRS  have expressed alarm at the tax agency’s decision to hire a former police officer who was convicted of illegally accessing FBI records and providing information to a person who was the subject of a counterterrorism investigation involving a figure associated with al Qaeda.

The IRS hired Mohammed Weiss Rasool, or Weiss Russell as he is known to the agency, to serve as a financial management analyst, which is three steps removed from the highest level career position. In his position he will be working on audit related issues and will have access to tax information that could be of great benefit to opponents of a group or individual subjected to an audit.

Republican Senate Candidate Christine O’Donnell testified to Congress that her private tax records were illegally accessed by a Delaware Department of Revenue employee who leaked that O’Donnell was supposedly delinquent on her taxes according to the IRS. However, when confronted about the issue, the IRS claimed the supposed tax lien was a mistake, but by then the damage had been done.

She told congress that in January 2013, she was told by a US Treasury Department special agent that her tax records were compromised and misused.

During the 2012 presidential election campaign, it was leaked that Mitt Romney had made a $10,000 donation to the National Organization for Marriage, which supports traditional marriage. NOM has said the information could have only come from tax records.

Ironically when such breaches occur, the IRS often tells individuals who have had their records violated that they are not allowed to release any information about the breach because of laws that prevent the release of taxpayer information. They claim that this law applies even to those who are the victims of having their records compromised.

Now, the agency has hired Rasool, an immigrant from Afghanistan who came to America in 1983, who improperly accessed the Fairfax police squad, where he was a sergeant, to help a friend out he met at a local mosque. His friend was worried about three vehicles that were following him and asked Rasool to check out the plates. Rasool discovered the plates were not licensed to an individual, but from a licensing company, a sure sign they were used by law enforcement. Rasool then passed the information along to his friend.

“This is absolutely outrageous,” said Chris Farrell, director of investigations at Judicial Watch, a government watchdog group. “Rasool has already demonstrated he’s not worthy of a position of trust within the government — he’s already broken one public oath — the last place you’d want him is at the IRS.”

Judicial Watch has demanded the IRS explain its reasoning for hiring Rasool in light of concerns about other incidents involving the agency leaking tax information and who it was at the agency or within the Obama administration who made the final decision to hire him.