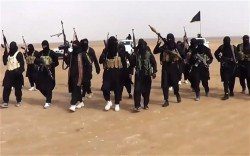 Iraqi Ambassador Lukman Faily said on Tuesday that his country’s leadership is floating options to seek military aid from countries such as Iran, Syria, and Russia in order to fight back against Sunni insurgents. Faily did say that his country would prefer to work with the U.S., but delays in aid have placed stress on the two countries’ alliance.

“That choice is primarily from the need, rather than the desire. Further delay only benefit the terrorists,” said Faily to an audience at the Carnegie Endowment for International Peace in Washington.

The Obama administration has held back supporting the Iraqi military with airstrikes, but the use of such military tactics have not been ruled out by the White House.

There are around 750 U.S. troops in Iraq currently. Half of these troops are there in an advisory role to help Iraqi security forces combat ISIL. The Obama administration has been outspoken about its reluctance to become intensely militarily involved in Iraq after removing troops from the country in 2011.

In the past 3 years, the U.S. government has sold more than $10 billion worth of military equipment and weapons to the Iraqi government. It has also provided a supporting role in surveillance and intelligence activities for Baghdad.

The entire situation is becoming a foreign policy nightmare for the White House.

The Associated Press reports, “Such an alliance [with Syria or Iran] could test the Obama administration’s influence overseas and raise risks for the U.S. as some of its main global opponents consider joining forces. Moreover, such a partnership could also solidify a Shiite-led crescent across much of the Mideast at a time when the Sunni-led insurgency in Iraq is trying to create an Islamic state through the region.”

Should the U.S. not respond to requests for additional aid from the Iraqi government in a timely manner, a multi-country Shiite alliance aimed at combating Sunni insurgents certainly is possible.

The U.S. government has committed to sending F-16 fighter jets to Iraq this fall, but the Iraqi government needs to first build hangers, train pilots, and handle financial matters before the transfer will occur.

“The Iraqis have been slow in terms of moving that part of the process forward. Now we’re in a place where some of those things are made more challenging by the security situation,” said Marie Harf, State Department deputy spokeswoman.