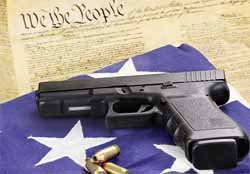 A Harvard study titled “Would Banning Firearms Reduce Murder and Suicide?” is sure to put gun control advocates into a tizzy after it validated what has long been known among second amendment supporters, that gun control does not reduce crime.

The Harvard study looked at figures for “intentional deaths” throughout continental Europe and juxtaposes them with similar data from the US. When they did, they were shocked to discover that contrary to the popular liberal mantra, gun control did not reduce crime and actually may have helped increase murder and suicide rates.

While some might say Western Europe has a different culture in America, the Harvard study found similar trends when examining murders in the United States. Gun control supporters around the world frequently attempt to claim that America is the most violent nation because of the Second Amendment and its easy accessibility to firearms. However, the study reveals that America actually comes in seventh place when it comes to murders, behind Russia, Estonia, Latvia, Lithuania, Polaris and the Ukraine. Gun control advocates have also claim that a person is more likely to be killed by their own weapon than they are by a stranger. However, these figures are arrived at by including suicide attempts. In the suicide category, America comes in number 22.

Showing the stark difference between gun control versus the Second Amendment, in Russia were handguns are banned, the murder rate is 30.6 per 100,000, while in the US the rate is a mere 7.8.

The Harvard study is simply another in a long line of research that validates that gun bans actually increase the murder and violent crime rate. Professor John Lott Jr., conducted a study of crime rates in the United States by County back in the 1990s. His research caused him to publish the results in his book “More Guns, Less Crime,” which was just released in a new edition this year. Lott has frequently criticized gun control proponents noting that the statistics they quote are frequently dishonest.

One of the frequent claims made by gun control supporters, including the president is that 40 percent of gun sales do not go through a background check.

Lott noted that over 90 percent of the 40 percent number involved inheritances and gifts between family members such as a father passing a firearm down to his son or daughter.

He also noted the study was conducted before the Brady bill was passed and researchers only interviewed 250 gun purchasers, asking them if they had went through a background check.

Another claim is that background checks have prevented 1.7 million people who were denied by the check from buying a gun.

Lott says while that number may sound impressive, the majority of those 1.7 million were false positives resulting from people having similar names to someone who is prohibited from owning a gun.

“The late senator Ted Kennedy was on the no-fly list five times because his name sounded similar to a terrorist. Using Obama’s logic about the 1.7 million felons stopped from buying guns, we would have to say DHS stopped five terrorists from boarding a plane each time Kennedy’s name came up. Of course, that is absurd.”