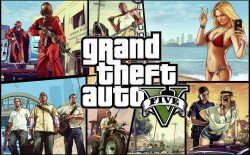 Take Two Interactive’s CEO Strauss Zelnick has heavily praised the team over at Rockstar, claiming that GTA V on PS4 and Xbox One will “blow consumers away” and “will exceed all expectations.”

The new GTA V will be coming to PS4, Xbox One, and PC in the Fall this year. Rockstar Games has already shown better visuals, more densely populated areas, and increased draw distances.

Currently, GTA V has sold over 34 million units on Xbox 360 and PS3 alone, but Zelnick says “there are 7 billion people on Earth. We still have 6.9 billion people to address,” an optimistic way of looking at the future of the Grand Theft Auto franchise.


The next generation library is not stocked with great games yet, as most are coming later in the year or early in 2015. GTA V could burst into next gen and PC this fall and really take over the market, we could see one of the first games to reach over 100 million sales.

Sony has already announced 10 million PS4 sales worldwide, and Xbox One is middling somewhere between 5 and 7 million sales. Steam has a combined user base of around 65 million, with even more using PC through different platforms like Origin, U-Play, and GOG.

Take Two Interactive obviously wants GTA V to do well on next gen consoles, and if it can achieve a repeat performance of the original launch, that would be huge for the company. The stocks for Take Two have already shown positive growth ever since the launch of GTA V.

Rockstar Games is currently working on Red Dead and perhaps a new Bully game, according to Creative Director Dan Houser. The remastered version of GTA V should be near completion for its official release in the Fall.