Ford Motor’s (NYSE:F) [stockdata ticker=”F”] quest to turn their automobile to “intelligent vehicle” has reached a new milestone as the company built its ten millionth car with built-in SYNC technology this week. Ford SYNC is an example of in-vehicle communication and entertainment system that integrates mobile communication devices such as Smartphones to make hands-free calls, change music tracks and utilize other applications via a voice controlled interface. Ford announced the first SYNC module in early 2007 and later released AppLink to control Smartphone apps. Ford describes AppLink as “SYNC AppLink uses voice-activated technology to build a hands-free bridge between you and your Smartphone applications.” It took Ford to build 10 million vehicles with SYNC almost 7 years and they are targeting sales of additional 3.5 Million SYNC enable vehicles by 2015. So far Ford has incorporated the voice control SYNC interface to almost all of its current product line including B-MAX, Kuga, Focus, Fiesta and C-MAX brands.

Ford Motor’s Global Director of Connected Services Solutions, Mr. Doug VanDagens mentioned that they are focused on incorporating data and connectivity to turn their vehicles into intelligent systems that enable the end-users to take “insight-driven action” while driving.

Since the sub-prime crisis recovery started in 2010, Ford’s revenues has recovered significantly after it fell to US$ 115 Billion in the end of 2009 from US$ 145 Billion a year earlier. Ford’s stock was trading at $1.43 on November 21, 2008 in the middle of a potential bankruptcy. However, as the Federal Government stepped in and revenues started to climb on a quarterly basis, Investors have renewed their confidence in the oldest most successful car manufacturer as the price of its stock has increased more than tenfold since then.

Automobile sector in the US has a rather low gross profit margin. However, compared to two of Ford’s competitors, General Motors Company (NYSE:GM) [stockdata ticker=”GM”] and Toyota Motor Corporation (NYSE:TM) [stockdata ticker=”TM”], its gross profit margin has been rather steady. Especially if we consider the kind of negative gross margin General Motors produced just a year earlier. 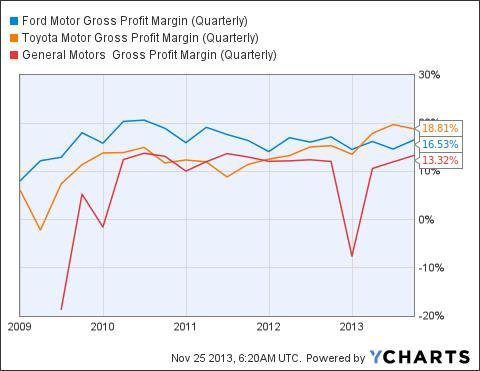 According to Valuentum Securities Inc, Ford stock’s fair price is around US$ 22 per share, and with a current P/E ratio of 14.33, it looks cheap at current market price of US$ 17 per share, as of November 25.