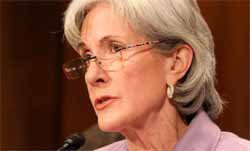 In a shocking admission before Congress, Health and Human Services Secretary Kathleen Sebelius said under Obamacare individuals tasked with helping people deal with the ins and outs of signing up for Obamacare and have access to private personal financial information could be convicted felons.

The revelation came when Sebelius was grilled before a Senate Finance Committee hearing on Wednesday. During the heated hearing, she was asked by Sen. John Coryn about stories that have appeared in the press that the administration was hiring convicted felons to help administer Obamacare.

“Isn’t it true there is no federal requirement for navigators to undergo a criminal background check, even though they will receive personal information from the individuals they help to sign-up up for the Affordable Care Act?” Coryn asked.

“That is true,” Sebelius replied. “States could have an additional background check and other features, but it is not part of the federal requirement.”

Apparently stunned by the lack of concern by Sebelius about the issue, Coryn followed up asking “So a convicted felon could be a navigator and acquire sensitive personal information?”

She responded by attempting to pass the buck to those who do the hiring of the navigators.

“That is possible,” Sebelius acknowledged. “We have contracts with organizations and they have taken the responsibility to screen the individual navigators and make sure they are sufficiently trained for the job.”

As problems with the website continue to plague Obamacare’s rollout the security of the information shared on the website has become more of an issue as time goes by.

It has been noted that a disclosure on the site plainly states that a person visiting the site has no reasonable expectation of privacy. When confronted, the administration claimed that was just standard language from a boiler plate template and people did not need to worry about it.

Thomas Dougall, an attorney from South Carolina was shocked when he was told by Justin Hadley, a North Carolina man that he had logged into his HealthCare.gov account and found Dougall’s personal information as well as that of another man.