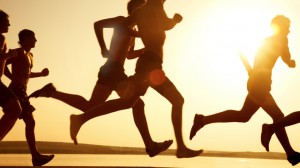 An Irish study recently examined the gut microbiota of athletes and determined that exercise has a positive impact on their diversity.

Gut microbiota, frequently known as gut bacteria and previously known as gut flora, are a complex collection of micro-organisms that live in the gastrointestinal (GI) tract. These organisms thrive within the body and assist with metabolism and immune system functions.

Recent studies have also shown that gut bacteria are linked to diabetes, gastrointestinal diseases, and obesity.

In addition to being present in the GI tract, in order to be most effective, gut microbiota must also contain a high level of diversity. When there are multiple variations of bacteria present, it is believed to improve metabolism and immunity. While it was already known that diet could affect gut bacteria, it was not known to what extent. Until this study, scientists also did not know if exercise had any impact on the micro-organisms.

The study, which was recently published in Gut, the peer-reviewed journal on gastroenterology & hepatology, addressed those questions directly.

The researchers go on to conclude that exercise increases the variety of gut bacteria.

The impact of exercise on gut microbiota might also have bigger implications on overall health. The Gut Microbiota Worldwatch, a European public information service, describes it as a major player in the functioning of the human body. It also links many health issues to its decline.

“Taking into account the major role gut microbiota plays in the normal functioning of the body and the different functions it accomplishes, experts nowadays consider it as an ‘organ’.”

This ‘organ’ requires a specific balance in order to function correctly. The incorrect amount of gut bacteria leads to a condition known as dysbiosis, which may lead to inflammatory bowel disease, obesity, allergies, and diabetes. Knowing the correct balance, however, can be difficult because the composition of gut microbiota is individual for every person.