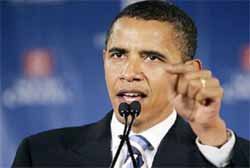 The Democratic National Committee is the latest to jump on the impeach Obama bandwagon with a new fundraising email it sent out to supporters.

The email featured the single word “impeachment” in the subject line. In the email, which was sent to Obama for America supporters, it begs them to contribute to the DNC’s 2014 campaign efforts to help retake the House of Representatives.

It warns, “This year, Republicans held their first committee hearing on impeaching President Obama.” It then goes on to ask for a donation. A similar email featured quotes from Republicans such as Sen. James Inhofe of Oklahoma, Rep. Michele Bachmann of Minnesota, Rep. Kerry Bentivolio of Michigan, and Rep. Blake Farenthold of Texas who have previously discussed the possibility that actions taken by Obama may have risen to the level of impeachment by committing “high crimes and misdemeanors” as outlined in the Constitution.

Among the many actions taken by the president are the unilaterally rewriting of his own health care law to issue waivers and move deadlines that are clearly specified in law, as well as the suspension of provisions without congressional approval to change the clear language in the law. Another item mentioned includes Fast and Furious, where the federal government told gun dealers to allow large quantities of weapons to be sold to known drug dealers and members of the Mexican drug cartels. Following the sales, the government then used the sale of American weapons to cartel members to argue for stricter gun control. The government even went so far as to threaten prosecution to some dealers who sold the weapons, despite their being told to allow the sale to go through.

Additionally, the IRS’s targeting of conservative groups in an attempt to silence them from criticizing the president has been cited as another abuse of power. The IRS even went so far as to demand the content of prayers conducted by individuals in the organization. Congressional investigations revealed the targeting was known by the White House and that IRS officials even shared confidential information with outside agencies, a clear violation of federal law.

The topic of impeachment has even been the subject of a detailed book on the idea, which was given to every member of Congress.

The email said that, “Republicans are actually excited about the idea.”

However, former Congressman Tom Tancredo, who is a candidate for governor of Colorado, said while he believes Obama has taken actions against the Constitution that clearly warrants impeachment, he does not believe it will ever happen because they do not want to go down in history as impeaching the first black president.

“Personally, I don’t think they will do it, regardless of whether they have a duty to do so or not, because they don’t want to rock the boat.”