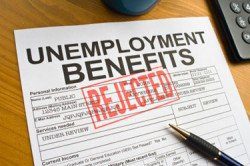 Democrats in the Senate are currently blocking a move that would attach retroactive unemployment pay to a tax cut bill. The unemployment measure would revive benefits for those whose payments ran out late last year.

“That’s not going to happen. There just isn’t the appetite I had expected on the Left to address the issue,” said Heller in an interview with the Washington Examiner.

This move by Democrats flies in the face of what the party has been publicly saying, as the left has consistently lambasted House Republicans for their refusal to pass an extension of jobless pay.

Republicans have refused to pass any unemployment extension unless there are job creation provisions within the legislation. The tax cut bill with the included extension would pass the muster of the House and help out millions of Americans. In this way, Republicans have held up their end of the bargain, it is just that job creating tax cuts are not something that the Democratic Party wants to take up right now.

“Nothing has been ruled out on the extenders bill, but anyone who wants to pass UI should be focused on pressuring Speaker Boehner, who has the Senate Passed bill sitting in his lap,” said Adam Jentleson, a spokesman for Harry Reid.

If Reid allowed Heller’s bill to go to a vote for passage, both the GOP and the Democratic Party would get what they want out of the situation.

It seems as if the ball is now in the court of Senate Democrats, as failure to pass Heller’s bill would be an act of abject partisanship.

“They haven’t lost the enthusiasm on the issue. They just think this isn’t the vehicle by which to get it done,” said Heller of Senate Democrats.

At this point in time it is becoming increasingly obvious that Democratic demands for an extension to unemployment benefits is nothing more than political posturing in order to win votes this fall. Thus, a Republican solution that is structured in a bipartisan manner will not do, as Democrats want to take credit for any extension.