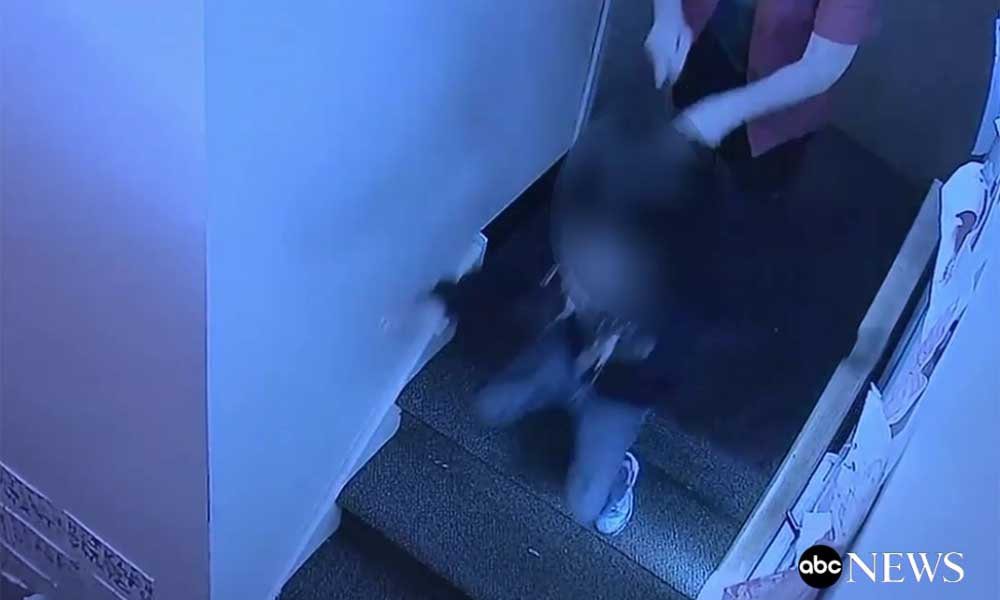 A Pennsylvania day care worker was arrested after a security camera, installed only 30 minutes prior to the incident, allegedly caught her pushing a 4-year-old girl down a flight of stairs, officials said.

The Delaware county police Superintendent Michael Chitwood said the worker had been identified as Sarah Gable.

Gable, a day care worker at Child Care of the Future, can be seen approaching the young girl from behind and shoving her down the stairs. The incident took place at about 5:15 p.m. Friday, according to Chitwood.

Gable, 52, can be seen watching as the young girl barely makes contact with about five steps before hitting a wall and tumbling onto the landing, Chitwood said.

The woman followed the tot down the steps and stood her up, then it appears she realized that the incident had been filmed. She is seen looking squarely into the camera before delicately leading the child down the rest of the staircase, the video shows.

The 4-year-old girl only suffered an injury to her knee, however, she was extremely shaken up and afraid to return to the day care, Chitwood said.

“When parents give their kids to day care centers, the expectation is that their children are going to be taken care of,” Chitwood said Monday.

“The camera caught it all,” he said, noting that had it not been for surveillance footage, it would have been the word of a 4-year-old, versus a 52-year-old.

“It’s a betrayal of trust and luckily we’re not dealing with a child who is seriously injured,” he said of the incident.

The woman is being charged with simple assault, harassment and endangering the welfare of a child. Police will also seek charges of recklessly endangering another person, police said.

Gable was freed on a $25,000 secured bond, which Chitwood said is an amount not fitted for the crime of which she is accused.

“Excuse my expression — it’s like pissing in the wind,” he said. “It should’ve been more. It’s a slap on the wrist.”

She is expected to appear in court on March 16, officials said. Child Care of the Future did not return a request for comment by InsideEdition.com, according to Yahoo News.

Daniel Anthony McGarrigle, Gable’s attorney, said that Gable is “relieved” that the child was not injured in the incident.