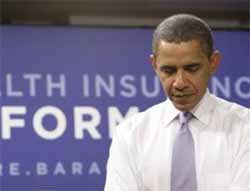 As the popularity of Obamacare continues to lose ground with the American people, cracks continue to emerge among Democrats, with the latest being former Democratic National Committee Chairman Howard Dean, saying the individual mandate isn’t an important part of Obamacare after all.

President Obama and his administration have long argued that the individual mandate, which forces Americans to purchase health insurance that meets the administration’s standards, is a fundamental element of the plan and key to its success. The reasoning is that young people need to sign up and purchase services they do not need and are unlikely to use in order to subsidize others in order to prevent policy holders with high risk of using services from paying higher rates.

The principle is long established in auto insurance where drivers in a high risk group, or with poor driving records as well as multiple DUI’s, are expected to pay higher rates than those with good driving records.

In October, the federal government partially shut down for several days over Democratic refusal to modify Obamacare, especially the individual mandate. Republicans argued that with Obama waiving the employer mandate, and with multiple exemptions given to other groups, the individual mandate should also be waived.

During arguments before the Supreme Court, the administration argued the mandate was constitutional and the high court agreed and upheld the law by arguing the mandate was a tax. The decision effectively made Obamacare, which was passed with exclusively Democrat votes, the largest tax increase in American history.

However, now Dean, who is a physician, says the individual mandate is not necessary for the success of Obamacare after all.

During an appearance on CNBC’s “Squawk Box,” Dean argued that the key premise of needing younger Americans signing up to make the program viable “doesn’t really matter that much.”

“This is about the individual mandate,” he said. “The individual mandate was not necessary and it’s probably a big political thing, and that is going to hurt the Democrats because people don’t like to be told what to do by the government no matter what party they’re in.”

The remarks by Dean are significant because of his position as former DNC chairman, as well as his being a doctor. Dean is also a former Democratic presidential candidate and current governor of Vermont.

His comments come as polling continues to show that Obamacare has the potential to be devastating to Democrats during the 2014 midterm elections.