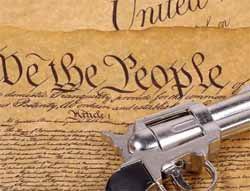 While some have claimed the recent elections heralded the death of conservatives and the tea party, Colorado Governor John Hickenlooper does not share their enthusiasm, and is asking outside gun control groups to stay out if a third state recall election occurs against another anti-Second Amendment lawmaker.

In September, state residents organized a grassroots recall against a pair of Democratic state senators who voted in favor of several party-line votes over a series of gun-control bills that were among the strictest in the nation.

Displaying their outrage, citizens in Pueblo and Colorado Springs launched a first-ever recall election against Senate president John Morse and Sen. Angela Giron. The recall was the first in the state’s history.

Recognizing the ramifications politicians being recalled would have on future attempts to restrict firearms ownership, gun control groups sprang into action, spending large sums of money to support the legislators targeted for recall.

New York City Mayor Michael Bloomberg personally donated $350,000 to Taxpayers for Responsible Government; an “issue committee” that attempted to help the legislators retain their seats was formed by Julie Wells, a Democratic fundraiser from Kentucky. Los Angeles billionaire Eli Broad contributed $250,000 to Wells’ organization, which then gave $420,000 to the two defense committees.

The Washington, D.C.-based Sixteen Thirty Fund gave $35,000 to help Giron fight the recall while Citizens for Integrity and Mainstream Colorado, both Denver-based organizations donated $20,000 and $15,000 respectively. Additionally, the American Federation of State, Federal and Municipal Employees union, based in Washington, D.C., contributed $3,500.

However, the gun control groups did not get a good return on their investment. In September, voters voted to recall the pair, leaving Democrats with a slim, one vote majority in the state senate.

However, even that lead could evaporate as residents are now attempting a third recall.

When the idea for the recalls first began, among the legislators targeted for recall was Evie Hudak, a two-term Democrat in a suburban district north of Denver. However, gun rights citizens initially decided against a recall against Hudak, fearing that three simultaneous campaigns would dilute their grassroots resources too much, choosing instead to focus on Morse and Giron, who they felt were more vulnerable.

Residents have until Dec. 3 to collect 18,900 signatures in order to initiate a recall election against Hudak. If Hudak were to befall the fate of her colleagues, the senate would swing back to a Republican majority, which would be able to prevent a repeat of the last legislative session where a host of liberal causes became law on issues including civil unions, abortion, and gun control.

While Hickenlooper would prefer the recall not take place at all, if it does there is something else he wants to prevent from repeating itself. The Democratic governor has asked Bloomberg and other outside gun control groups to sit this one out if Hudak were to face the voters in a recall.

“Colorado is a state that people like to be themselves and solve their own problems,” the Democratic governor said in an interview with Capital Download, USA TODAY’s weekly video newsmaker series. “They don’t really like outside organizations meddling in their affairs, and maybe the NRA gets a pass on that.

“But (it is) probably not a bad idea” for gun-control groups to stay out of the Hudak’s recall if enough signatures are gathered.

During the Virginia governor’s race, Bloomberg spent $1.1 million to help Democrat Terry McAuliffe squeak out a victory against conservative Republican candidate Ken Cuccinelli. McAuliffe has called for an assault weapons ban, long a goal of Bloomberg in the state and nationally.

While the expenditures were able to help McAuliffe achieve victory, it was far closer than expected, with his winning by only three percentage points. The Libertarian candidate received 7 percent of the vote, much of which would have probably gone to Cuccinelli, who would have won the election.

Following the recall of Mores and Giron, legislators have been skittish about pushing gun control legislation for fear of a similar thing happening to them.

“I think there are a lot of indications that lawmakers are quaking in their boots over the Colorado recall,” Erich Pratt, director of communications for Gun Owners of America said. “It was time for another wake up call. We had one in 1994 and again 2000 where Lieberman said it was the gun issue that cost them the election. It seems as if every few years ago the Democrats need to have some of their scalps nailed to the wall to remind them that this is a losing issue despite what the pollsters say.”

Sen. Chris Murphy, D-Conn., who was a House member representing Newtown at the time of the Sandy Hook shooting said, “The results of the recall were not good news.”

House Minority Whip Steny Hoyer (D-Md) said while speaking at POLITICO’s Morning Money Breakfast in Washington following the shooting at the Naval Yard in Washington DC that he expected the shooting to “renew the discussions” over gun control, but he believed the recall elections in Colorado would prevent any new gun control measures from being enacted.

“It does not bode well for asking people to vote for legislation similar to that which went down in the Senate just a few months ago,” he said.

If voters were to achieve a third victory against a gun control legislator, it would further set back the issue for advocates.

Thanks for the correction, Larry!

‘Self-Insured’ is the new swing voter in 2014?
More Democrats turning against Obamacare