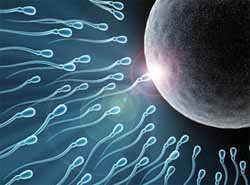 Using in-vitro fertilization, British scientists may be able to create babies from two eggs and one sperm.

The process, being known as three-person IVF, is being studied as a way of preventing mitochondrial disease.  Since mitochondria are only passed from mother to child, scientist hope to decrease the odds of disease by also using the egg of a woman with healthy mitochondria.

Mitochondrial disease can include many specific diseases, but they are all linked in that they are caused by damage to the mitochondria. The mitochondria are responsible for 90% of the energy that are body needs. When they are not functioning correctly, death is a possibility.

Currently 1 in 6500 people is born with mitochondrial disease. Scientists hope to reduce that number by manipulating the embryos of two fertilized eggs. The embryo of egg would be used to provide healthy mitochondria, while the other would provide the genetic information.

The resulting child would have features of the mother and father, but mitochondria from a different woman.

Sarah Norcross, of Progress Educational Trust, a London based charity focused on research and awareness in issues in genetics, assisted conception, and embryo/stem cell research is anticipating that the procedure will benefit families. She explains that, “the scientific review committee have given a considered thumbs up to allowing techniques to avoid the transmission of inherited mitochondrial disease to be used in clinic” and continues to urge the government to approve the procedure as soon as possible.

While many people are excited about its potential, this process has not yet been conducted in humans. Scientists are therefore not sure of the outcome. Professor Andy Greenfield discussed concerns of the potential safety of this procedure:

Scientists plan to finish testing this technique and believe they can produce a healthy baby made in this manner within two years.  If successful, the United Kingdom would be the first country to develop this type of technology. The government of the UK has yet to approve the procedure.

One in 8 US children maltreated, according to study
Stress triggers binge eating on comfort foods