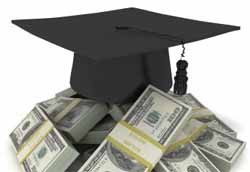 The Consumer Financial Protection Bureau is criticizing student loan providers that demand borrowers pay back their entire loan in full if a co-signer files for bankruptcy or dies, even if they have not missed a single payment.According to the CFPB, this demand often catches borrowers off guard when they are grieving and it does not make financial sense to put these borrowers into default.

About 3600 student loan and student loan-related debt collection complaints were submitted to the CFP consumer complaint database between October 2013 and March 2014, which brought these “auto defaults” to light.

“Students often rely on parents or grandparents to co-sign their private student loans to achieve the dream of hgher education,” said CFPB Director Richard Cordray. “When tragedy triggers an automatic default, responsible borrowers are thrown into financial distress with demands of immediate repayment.”

According to a 2012 report from the CFPB and the Department of Education, nearly 90% of new private student loans are co-signed, although federal student loans usually do not require a co-signer. Private loans were much more common before the financial crisis, although many borrowers still owe a significant amount on these pre-2009 loans, which often have higher interest rates than federal loans. Co-signers have equal responsibility in repaying the debt.

Many private loan contracts contain a clause allowing the lender to demand immediate repayment and put the borrower in default.

“We do have some concerns that with an aging population and with very long terms on certain private student loans, that this could actually increase over time,” said Rohit Chopra, the student-loan ombudsman at CFPB.

The report found that the auto default practice may occur when lenders rely on third parties to automatically trigger the default, regardless of circumstances. While many private loan companies advertise the ability to release co-signers, the process is often very complicated.

A CFPB study released in 2011 found that almost $1.5 billion of $150 billion in securities backed by private student loans were in bankruptcy either due to a borrower or co-signer filing for bankruptcy.

According to Sallie Mae, the largest private student loan provider in the country, it generally begins a discussion with the surviving borrower after placing a claim on the deceased person’s estate to see if it will allow the borrower to remain on the loan alone. The biggest factor in this decision is how long the borrower has been repaying the loan as agreed.

If the borrower is many years past graduation, there is a better chance they will get a co-signer release that allows them to keep the loan on their own with terms unchanged. If the co-signer dies soon after graduation, the borrower will likely be forced to find another co-signer with good credit and income.

To avoid auto defaults, the CFPB recommends borrowers contact their lender to ask if the co-signer may be released from the loan if they die or file for bankruptcy, although the agency warns there will likely be many hoops to jump through. The CFPB also recommends lenders look for alternatives to auto-defaults, as it says they do not seem to be in the best interest of the lenders, either.