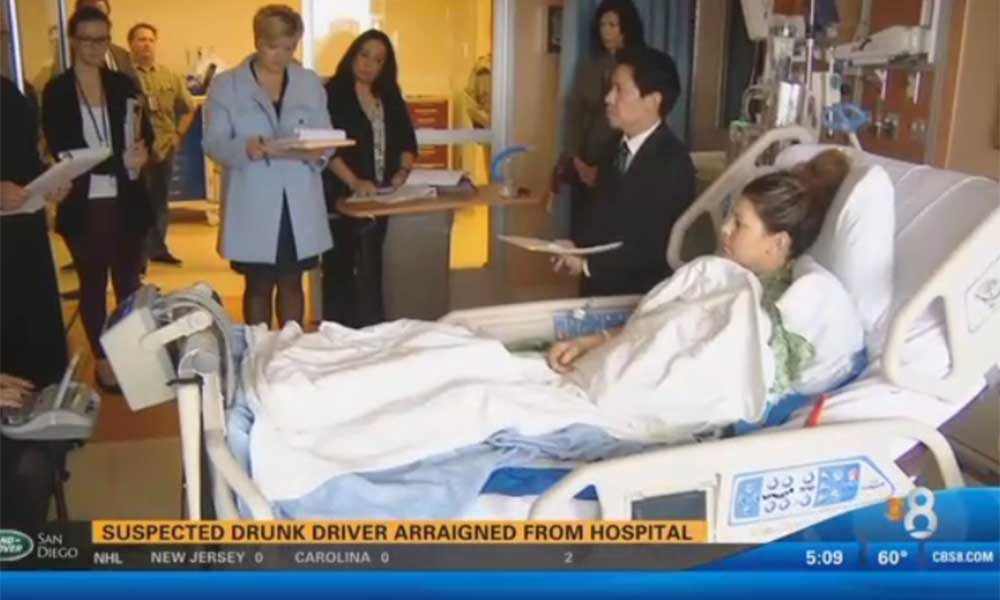 A woman suspected of drinking and driving and accused of causing a wrong-way, head-on collision that killed one, was arraigned in her hospital bed on Tuesday.

Alexandria Bayne, 34, is accused of causing the wrong-way, head-on collision that killed the mother of a 4-year old child.

Bayne was arraigned at Scripps Memorial Hospital in La Jolla, California. She was ordered to be held at a $3 million bond.

She pled not guilty to murder, gross vehicular manslaughter while intoxicated, four counts of child abuse, driving under the influence of alcohol causing injury, prior DUI, driving with a measurable blood alcohol content and driving the wrong way on a divided highway on Tuesday.

Prosecutors allege that Bayne’s blood alcohol level at the time of the collision was .33 percent – more than four times the legal limit. Bayne has two prior DUI’s on her record – one in San Diego County in 2005 and another in Los Angeles in 2008.

A readiness conference is scheduled for January 17. If convicted, Bayne faces 25 years to life in prison.

The victim in the crash was 38-year old Sarita Shakya. At the time of the accident, Shakya was driving her Toyota Sedan westbound through Rancho Bernardo. Bayne was traveling the wrong way, eastbound in the westbound lane, and collided head-on with Shakya.

Paramedics immediately tended to Shakya upon their arrival, but she was pronounced dead at the scene.

Shakya was a nurse and the mother of a 4-year old child. Shakya was coming home from work at the time of the crash. Neighbors said that she had taken on the night shift so that she could spend more time with her daughter.

Shakya also left behind a husband and other extended family.

The San Diego County District Attorney said Bayne had been drinking all day and night before she decided to get behind the wheel of her car that night.

“The defendant began drinking at home, went out for brunch with her children where she continued to drink champagne at lunch,” Deputy District Attorney Cally Bright said. “She dropped her kids off at a friend’s house, had several drinks at the friend’s house.”

Bayne suffered major injuries in the crash. Officials did not have an update on her condition at the time of the arraignment.