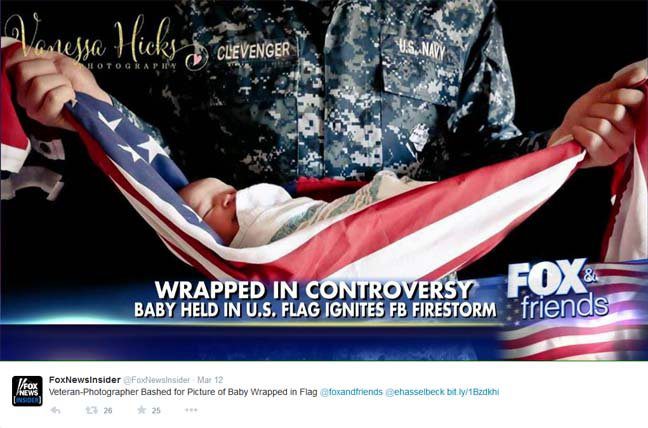 A Facebook picture of a newborn infant swaddled in an American flag has raised what was described as “outrage” over the technical misuse of the flag. The photographer is now receiving an unprecedented level of publicity regarding the picture.

According to the photographer, a swell of outrage was received regarding the photo, which depicts an eight-day old baby being held in the flag, held by a US Navy member. The picture has no demeaning or nonstandard characterizations of the baby, the flag, or the military person. The supposed outrage is said to be due to the misuse of the American flag.

The picture was said to honor the military and America in general. In an interview with ABC, the photographer stated “This is what he was fighting for, his son wrapped in an American flag.”

Unfortunately for the photographer, the picture was apparently targeted by internet trolls and bullies. These individuals cited the flag as desecrating the flag. Technically, these internet trolls are correct. One of the rules of the US Flag handling procedures has been to never use it to carry other objects.

“I know how low I felt during those first few hours,” said the photographer. “[I felt] am I not a good American or veteran or wife. It’s a train-wreck you can’t help but watch.” She then added “At the end of the day I didn’t do anything that disrespected this flag.”

The photographer stated that she deleted a majority of the negative comments. However, there seem to be almost no negative remarks at all. The story on Twitchy.com included a bevy of positive and supportive remarks from across the world.

A vast majority of individuals would agree with the photographer, which leads to the inevitable conclusion the supposed controversy is more of a publicity opportunity. Internet trolls will find a way to try and rouse rabble and stir up emotion. In this case, the photographer either used the opportunity to push her name, or drummed up false outrage to gain public interest in a universally likeable photo. Without the “controversy”, the photo is mildly striking. With the controversy, it has become the trending topic.

Continue Reading
You may also like...
Related Topics:Baby Swaddled in Flag, Internet, Outrage