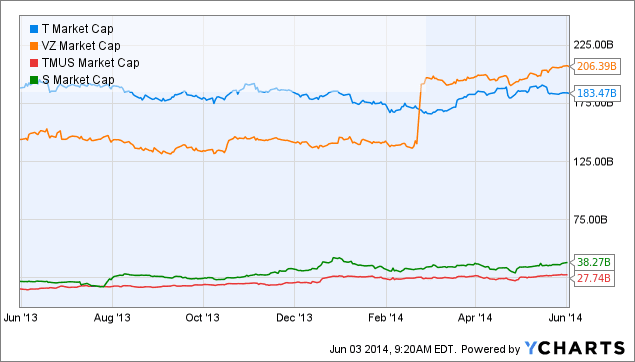 According to technology and strategy consultant Chetan Sharma, both AT&T and Verizon captured 34% of the US mobile services market share during the Q1 2014. While these two companies have different service portfolios, according the Mr. Sharma, their total subscriber base had similar numbers.

The recent acquisition of Leap Wireless by AT&T helped the company get enough subscriber from the popular Cricket brand to tie with Verizon in market share. It is natural in heavy market cape industries to consolidate market share in the hands of fewer companies, said Chetan Sharma in the article. “It allows more efficient deployment of the capital or else everyone gets bloodied in the turf war,” he added.

The current structure of the US mobile carrier market is not likely to stay the same over the course of the next few years. Daniel Kline, a contributor at The Motley Fool, recently mentioned that the majority stakeholder of T-Mobile (NYSE:TMUS) [stockdata ticker=”TMUS “], Deutsche Telekom AG, has agreed not to react if the merger of T-Mobile and Sprint goes through.

The merger between the third and fourth largest US mobile carriers will change the landscape considerably. Given that T-Mobile has been on the offensive to steal market share from the large two carriers, AT&T and Verizon, for the last few quarters, the merger will only accelerate that effort.

Market competition always cuts through the profitability of the participants, as the smaller companies try to undercut the larger companies. Commenting on the T-Mobile’s strategy, The Street mentioned that “it (T-Mobile) is buying customers out of their existing contracts, and is attempting to offer data plans at a fraction of the price of larger competitors.” 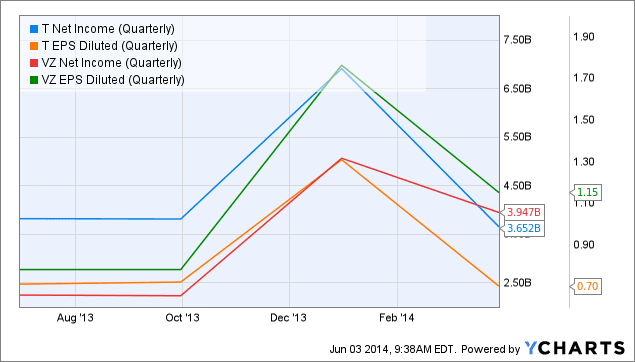 Since the end of 2013, both AT&T and Verizon’s net income reduced significantly as they tried to keep up with the competition from T-Mobile and Sprint. In the process, the profitability of the entire industry has gone down amid fierce price war. Under the current circumstances, investors should take caution regarding investing in this industry. If they have to have mobile carriers in their portfolio, betting on the underdogs may prove to be a wiser choice.