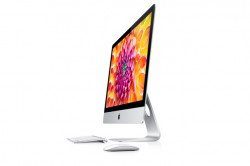 When CES 2014 finished, a lot of people said that this is the year of 4K, even though last year we did have 100 inch and above televisions on display, showing off how great 4K could be for just over the price of an average car.

This year may have been toned down slightly, with companies deciding to still show off their surreal theatre sized televisions, but also offering explanations on when and what 4K will bring to the living room.

We came out of the event with an idea of when 4K will be available to the average consumer. Maybe not this year or next if you want to spend less than $10,000, but within the next five years we should see quite a big push in 4K and adoption in high-wealth countries.

Apple may want to hop in early to provide the very best in resolution. After revealing the Mac Pro will support 4K displays, a lot of people have said the Cupertino based company is looking to make its own 4K display and integrate it in the next iMac, possibly coming out this year.

It would be a big push into the 4K market for Apple if it was to add a 21 to 25-inch 4K display in its All in One machine, as the retina display on the current set of iMacs is rather impressive and enough for most professionals.

More evidence of Apple working on support for 4K in OS X is provided at Anandtech, where they show all the different new features Apple has implemented into the latest version of OS X to make 4K displays more compatible and to possibly prepare for its own 4K monitor.

Currently, 4K displays for PC will cost anywhere from $4,000 to 15,000, depending on the design and size of the screen. It almost feels like full HD all over again, and in the past two years we have seen a rather large drop in value for full HD, with plenty of displays and TVs now available for less than $200.

It is exciting to see innovation in the display world happening so fast. The move up to full HD took far too long, and we want to see 4K prices go down much quicker. We have already seen 8K shown off by Sharp, but we cannot see this being a commercial offering until at least 2020.