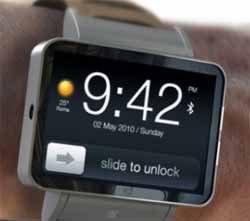 Apple Inc has filed application for trademark for its new gadget ‘iWatch’ in various countries worldwide. This move fuels speculation that the technology giant is setting the stage to finally unveil and launch its wearable computing device. iWatch is expected to go head-on-head against similar products that are on stream from rivals Samsung and Google.

According to reports, the technology firm has long been working on iWatch. The innovative device is predicted to be launched some time in 2014, although some insiders claim this schedule may come ahead of time for a release later this year. If it would push through, it would reportedly be the biggest launch for a gadget by the company since the unveiling last year of its iPad mini.

Trademark around the world

Last week, it was discovered that Apple filed for a trademark for iWatch in Japan. According to information posted at the online site of the Japan Patent Office, the company applied for a trademark for the yet-to-be-introduced device on June 3. The data shared by the Website did not disclose the duration of the entire application process but it revealed that the trademark application would cover Apple’s computers, peripherals, and wristwatches.

Before that, Apple also directly filed last June 3 applications to trademark its new moniker in Taiwan and Mexico. At the same time, it filed for the same process in Turkey, although that filing was initiated by a lawyer identified with the technology firm. According to some reports, there is also a similar trademark application in Columbia. Prior to all these discoveries, Apple had earlier confirmed that it filed for iWatch trademark in Russia.

Talks about Apple preparing to roll out iWatch started last month when CEO Tim Cook mentioned in one of his public speeches that the company thinks it is already the right time to explore and develop wearable technology products. To most technology analysts, such wearable devices could be the next big thing in the industry after iPhone and Samsung’s Galaxy series of gadgets reached their level of market saturation.

Logically, competition among technology firms over ‘smartwatches’ is already gaining pace. The leading smartphone maker in the world, Samsung, is reportedly developing a similar wearable device, which may look more like a regular wristwatch except for its specifications. For its part, Google is expected to soon launch its Glass eyewear, another upcoming wearable technology product.