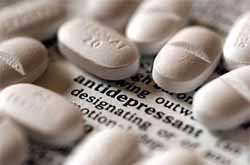 Mothers who take antidepressants during pregnancy are more likely to have children with autism, states a new study released Monday that was funded by the National Institutes of Health.

Boys were more likely to be affected by the mother’s antidepressants or SSRIs use, with the research results indicating that boys diagnosed with autism were three times more likely to have been exposed to the medication used to treat major depression.

Study co-author Li-Ching Lee, an associate scientist in the department of epidemiology at Johns Hopkins Bloomberg School of Public Health, in Baltimore, is reported by HealthDay News as saying: “We found prenatal SSRI exposure was almost three times as likely in boys with autism spectrum disorders relative to typical development, with the greatest risk when exposure is during the first trimester.”

However, while the study is able to identify an association between antidepressant use and autism in children, particularly boys, it is unable to make cause-and-effect pronouncements. The researchers also noted that there are risks to both mothers and fetuses from untreated depression in mothers.

Lee said:  “It’s a complex decision whether to treat or not treat depression with medications during pregnancy. There are so many factors to consider. We didn’t intend for our study to be used as a basis for clinical treatment decisions. Women should talk with their doctors about SSRI treatments.”

The study, published in Pediatrics, identified SSRIs such as Celexa, Lexapro, Paxil, Prozac, and Zoloft as the ones linked to boys who were diagnosed with autism.

The US Centers for Disease Control and Prevention indicates that one in 68 American children currently has some form of autism. At the same time, antidepressant use has increased over the last few years. About 11 percent of Americans, age 12 and over, are taking SSRIs; 23 percent of women in the 40s and 50s age group, and seven to 13 percent of all pregnant women are taking SSRI antidepressants.

The researchers noted that, “Serotonin is critical in early brain development, creating concerns regarding prenatal exposure to factors influencing serotonin levels, like (SSRIs).”  In this study, 966 mother-child pairs were investigated for possible associations between prenatal antidepressant use and autism spectrum disorders and other developmental delays. The study participants were enrolled in the Childhood Autism Risks from Genetics and the Environment (CHARGE) study.