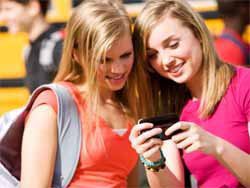 Teenagers across the US are now into texting more. This is according to findings of a study conducted and recently released by the Pew Internet and American Life Project. This suggests that American teens are logically heavy users of mobile phones for the texting functions provided.

Looking more closely into the data, older girls were found to be the most enthusiastic texters among American teenagers. They send an average of 100 texts per day. Teenage boys send just half of that number, 50 texts each day. For the boys, the number also rose compared to the average of 30 texts daily they sent in 2009.

According to the study, most of the survey respondents prefer to communicate with others through text messaging. In fact, they consider short messaging service (SMS) as a dominant and easy mode of communication on a daily basis. Not surprisingly, teens prefer texting than calling using their mobile phones. This could be because most of them find texting as more fun.

Pew Internet and American Life Project said the research involved 799 teenagers from across continental US who were randomly selected. The survey was conducted through telephone from April to July 2011. Of those, 23% own a smartphone like a Blackberry or an iPhone. The other 77% had other types of mobile phones.

A similar study is yet to be conducted for this year. However, analysts are sure that there could be a significant change in findings. This is because most mobile users are now into the use of various apps that are accessible only through smartphones. This may also possibly lead to a rise in the number of smartphone users among this age group.

Without any doubt, texting is the centerpiece of current mobile teen behavior. According to separate data generated and released by research firm The Nielsen Company in 2010, up to 43% of teenagers across the US use cellphones to text friends and family members.

Thus, this age group prefers phones with QWERTY input, which makes it easier and faster to compose text messages. In 2008, the main priority of teens when buying and using mobile devices was safety.