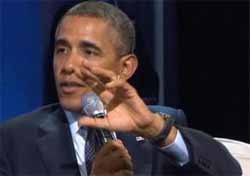 New regulations issued by the Obama administration this week are requiring members of Congress to purchase one of their higher-quality, top-tier insurance plans from the Obamacare health exchanges.

In issuing the rules, the Chief Administrative Officer (CAO) of the House sent guidance to members of Congress this week, based on a directive from the Office of Personnel Management (OPM), which says they have no choice but to choose plans from the “gold” level of insurance coverage and they will not be permitted to obtain the “bronze” or “silver” plans which the majority of Americans are expected to have. The only plan that is higher is the “platinum” plan.

“For plan year 2014, Members of Congress and designated congressional staff will choose from 112 options in the Gold Metal tier on the DC SHOP,” CAO said in a fact sheet e-mailed the Congress.

During a House floor speech on Thursday, Rep. Andy Harris R-Md. called attention to this requirement noting it was another example of favoritism being showed toward members of Congress and their staff.

“We all … have to go and get the gold policy. Not the bronze, not the silver, the gold policy from the exchange. That’s the only one we can get,” he said.

“You see, bronze and silver’s only good enough for everyone else in the country. For members of Congress and members of the Senate and their staff, it’s gold or nothing.”

Many Americans have been outraged since it was revealed that members of Congress do not have to live by the same rules they do regarding Obamacare coverage, and are instead being granted generous subsidies that are far superior than that given to most Americans. Members of Congress have defended the subsidies saying that having to live under the same rules as the rest of America would cause undue hardship on them and their staffers, resulting in a “brain drain” from Washington DC.

Additionally, the fact sheet says that if members of Congress want to obtain the subsidies for their insurance plans, the only way to get it is by using the Washington DC, health insurance exchange, or SHOP.

“All Members of Congress, including representatives of U.S. Territories, and their designated staff will be required to purchase health insurance via the DC SHOP in order to receive a Government contribution,” it says. “The DC SHOP offers health plan options with in-network access to medical providers across the nation and overseas.”